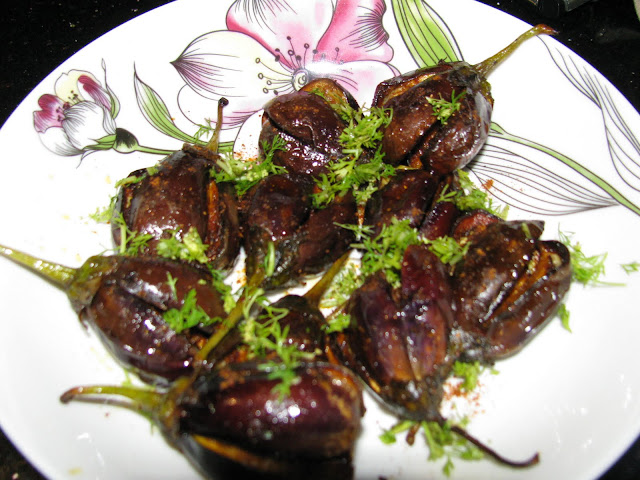 Brinjal (also known as Eggplant or Aubergine in different parts of the world) comes in many sizes, shapes and colours. The variety that suits this recipe best is the small, round and purple one. The most common use of brinjal in India is to make curries with tomato based gravy, or cashew based gravy or stuffed brinjals. I wasn't a big fan of brinjal and growing up, my mom always had to prepare a separate curry for me if she was cooking brinjal. Those were the days when i still got to demand special treatment. Now, when i have to do the cooking myself, i am willing to adapt. OK, you already figured that out. 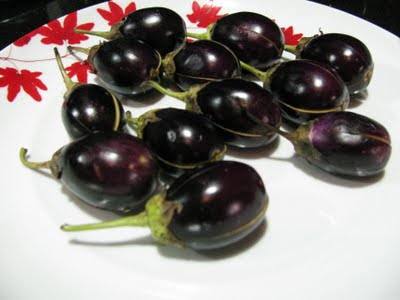 I make this quite frequently now, once a week and while i still can't say i have fallen in love with this purple vegetable, at least i am eating it this often. Well, the recipe i am talking about here, i learnt from my mother-in-law after marriage and slightly adapted it by adding the garam masala powder. I first tried to make this without asking for the recipe, just having eaten the end product. Yeah, it was bland and it was a disaster. But you know what, with the recipe in hand and my adaptation of it, my father-in-law tasted my  new version and declared it better! And my mother-in-law was sweet enough to convey these comments back to me :-)
Ingredients

Method
In a small bowl mix together 1 and 1/2 tablespoons oil, salt, turmeric, chili powder and garam masala. Adjust the seasoning according to your taste, and mix into a paste. Make two vertical slits into each brinjal up to the stem without cutting all the way through.
Once cut the brinjal's insides turn brown quite soon, so i suggest preparing the paste first before cutting. Now apply the prepared paste inside the brinjal, rubbing into the cuts until all the exposed cut white area of the brinjal is smeared with the paste. Put the remaining oil in a kadai pan and place on a stove with low flame. Once the oil becomes hot (not smoking), place the brinjals in the pan, close pan with a lid and allow to fry on low flame. 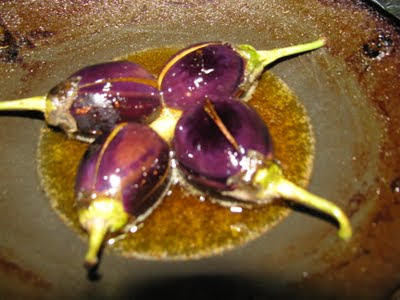 It will take about 7-8 minutes, turning the pieces once after 4 minutes. I use a small pan and fry 4 pieces at a time, you can use a large pan and fry all the brinjals at a time. Be sure to close with a lid and to keep the flame on low - the slow cooking not only helps in frying the brinjal evenly without burning the outside, but also absorbs the flavour of the spice mix applied to it.
Garnish with chopped fresh coriander and a pinch of additional garam masala. The spicy baby brinjal is now ready to serve. It tastes best as a side dish with rasam (or sambar) rice as shown in the below pic. 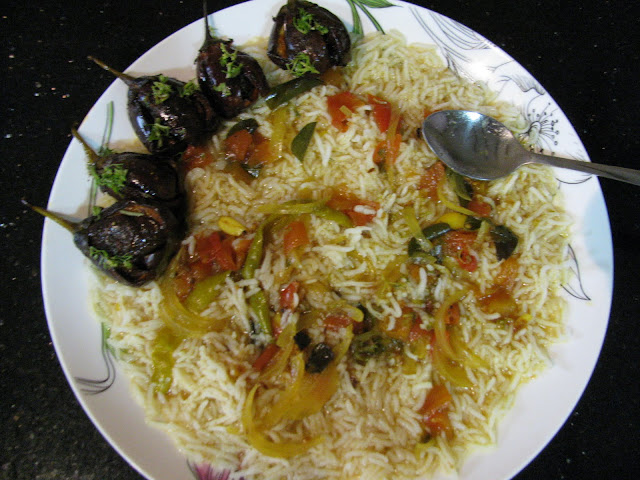