I had lived outside India in the developed countries of the world for more than two years during those single and carefree days and probably cooked chicken 5 times or even less. And once married i found out that my husband cooked chicken 500 times or something - more often than any other food cooked during his bachelor years in America. This meant that he considered himself a better cook than me - definitely for cooking his favourite chicken curry - and insisted on teaching me. 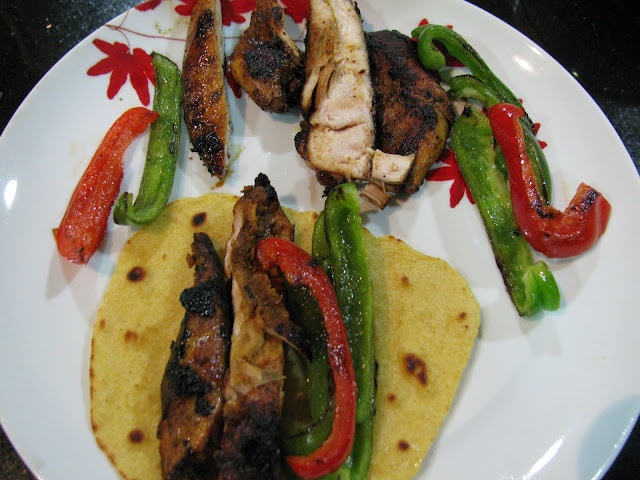 The shy bride and ever humble student that i was, i meekly complied. What this means today is that i have totally unlearnt my way of cooking chicken curry (i faintly remember there used to be a yogurt based marinade) and have learned his way (with no diary based products in any cooking. But, of course we eat cheese. Who doesn't eat cheese!?). By the time i had mastered 'his chicken curry', - and was going to get all smug about it - he had come up with suggestions for experimenting with more chicken recipes - different kinds of marinades, and different cuts of chicken and the types of veggies that go well with chicken. This turned out to be one of those successful dinner ideas. 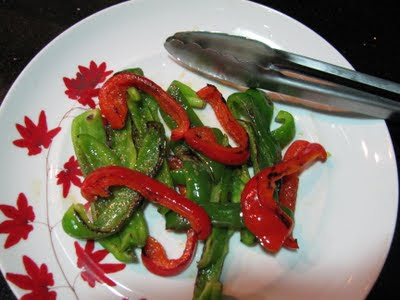 As promised in my previous post, here's another chicken dish that is now a regular in my home. We have it once a week or definitely once within a fortnight. Give it a try with your own variations and find out what works for you.
Ingredients
For the tortilla

Method
Preparation: The first step is to marinate the chicken. Thoroughly wash the chicken and drain all water. Rub the chicken with the turmeric. Now rub in the soy sauce and garlic paste. Cover with a lid or plastic cling film and keep refrigerated for at least 30 minutes and up to 4 hours.
Wash the bell peppers and dry them. Discard the stem, seeds and white membrane and cut them into 1 inch wide long strips.
Next prepare the dough to make the tortillas. Mix together the cornmeal and flour with the warm water and knead lightly into a soft dough. The dough mixed with cornmeal is not as tight as that using flour entirely and will also dry out faster. So once the dough is ready, divide it into small balls and keep it covered to prevent from drying. 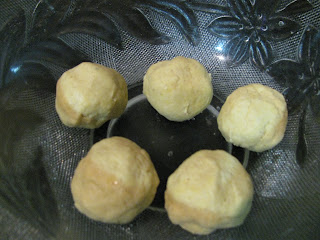 Cooking: Now heat a griddle or a thick flat bottomed pan on medium - medium high heat. Roll out the dough balls into flat breads on a floured surface sprinkling additional flour on the top and on the rolling pin to prevent from sticking. Transfer to the hot griddle and drizzle a few drops of oil on top. Allow to cook for approximately two minutes or until you see brown spots forming on the bottom. Turn it to the other side and cook for another minute until done. These will be used as a wrap to serve the chicken and bell peppers. Store these tortillas in a kitchen towel to keep warm while cooking the peppers and chicken. 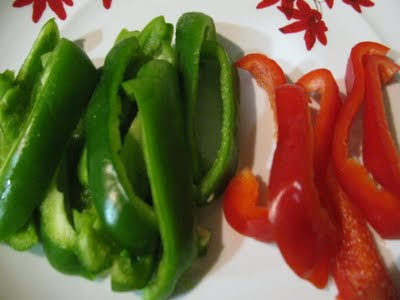 Place the bell peppers on the hot griddle. Drizzle oil to prevent from sticking and toss them around every minute or so. Cook for about 6-7 minutes or until the peppers soften. Season with some salt and pepper according to taste just before removing from the heat. 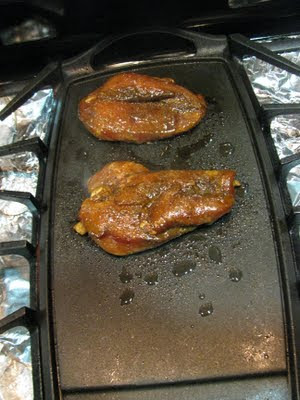 Now place the chicken on the hot griddle and drizzle the sides with a teaspoon of oil. Cook for about 5-6 minutes on each side until the chicken is done and not raw anymore.  The chicken should be white inside and not pink. Transfer to a plate and cut the chicken into strips similar in size to the bell pepper strips. 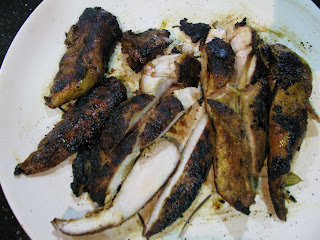 To make the fajita, place a few strips of chicken and some bell peppers on a tortilla and serve with some salsa, guacamole, relish or tomato ketchup. You can add grilled onion and tomatoes too. A quick, easy, colourful and healthy meal is ready. 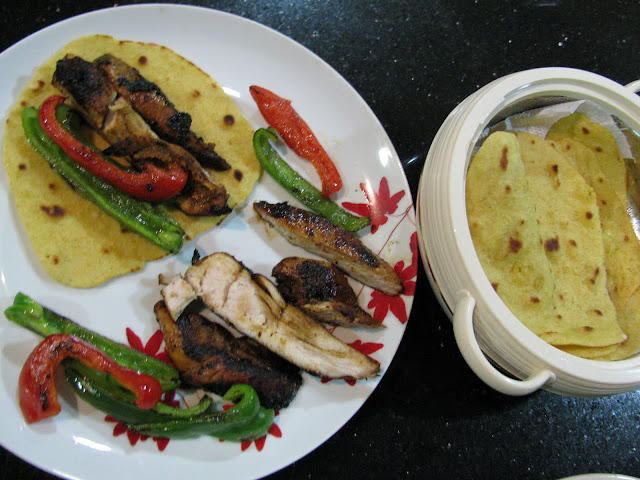