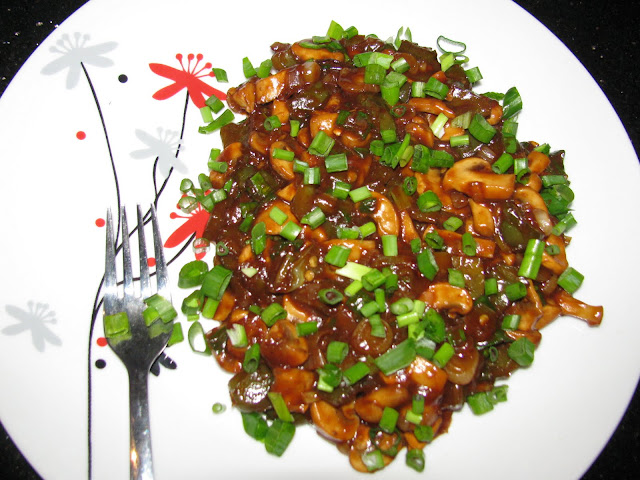 On the last day of our recent holiday, an hour before boarding the train, we went to a nearby restaurant to have some snacks and to get dinner packed for the overnight journey. Having had our fill of dosas and puris over the previous three days, we ordered a plate of Mushroom Manchurian which was listed under 'Chinese snacks'. Indianised version of Chinese food is huge in almost all parts of India. From small mobile street stalls to fancy restaurants, there are many who serve "Chinese" food in India. But if you have ever been to China, you would know that it is something completely different. No is the answer, if you are asking me if i have ever been to China. But i talked to a good friend who did go, who was there for a few months for an IT project. And heard him complain about how there was nothing to eat in China. He never expected a problem when going there because he was eating "Chinese" in Kolkata (or you may know it as Calcutta) all the time. Eventually, he did adapt quite well and bragged about being able to eat peanuts with chopsticks. Apparently that's not the easiest thing to do. 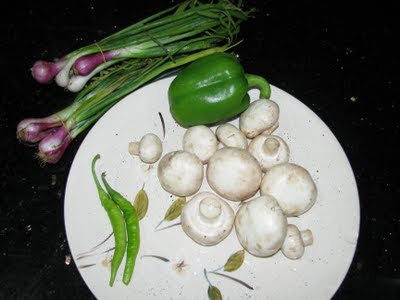 I probably veered off topic a wee bit, but what i was getting to is that the recipe you see below is probably nothing like the original Mushroom Manchurian made in Authentic Chinese restaurants. Its just my version of what i ate in a small town restaurant and having liked it, how i made it in my kitchen. We have never had much luck with trying out new items at restaurants, and we were pleasantly surprised that we liked this one and finished off the plate within minutes. It wasn't the traditional deep fried vegetable served in dripping soy sauce. It looked like the mushroom was sauteed with onion and peppers and spiced just right with a hint of soy sauce. In the below version i cooked up a little gravy to make a wet Mushroom Manchurian that is good with rice or noodles to make a complete meal. I have also given the variations for a dry version to eat just as a snack. 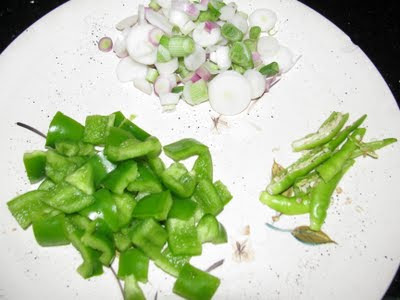 Method
1. Wash and slice the mushrooms to 1 centimeter thick pieces. Mix together soy sauce, vinegar and ginger garlic paste in a bowl and throw the mushrooms into it. Mix to coat the mushrooms in the marinade. Allow to rest while getting the rest of the ingredients ready. 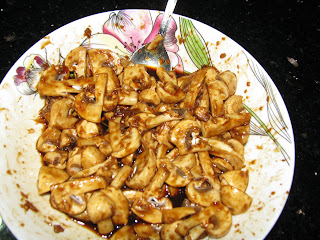 2. Slice the spring onions and separate the green and white parts. Chop the capsicum into one inch squares approximately. 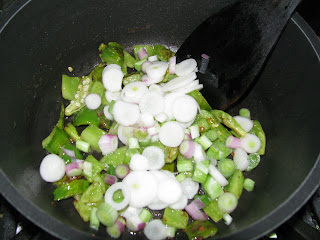 3. Heat the oil in a frying pan on medium heat and add the capsicum, chilies and the white/pink portion of the spring onions to the pan. Stir and saute for a minute. Add the marinated mushrooms into the pan leaving the liquid in the bowl. 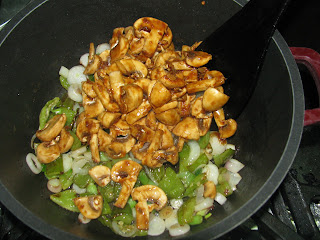 4. While the mushroom is frying, add the cornflour to the marinade liquid left out and mix evenly. Add the tomato ketchup and stir. Add the cornflour mixture and stir quickly as the sauce thickens. 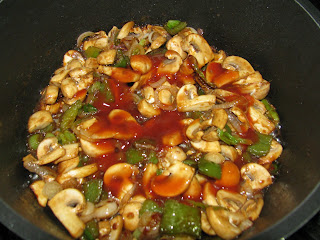 5. Season with salt and pepper according to taste. You now have my version of wet Mushroom Manchurian ready to serve. Oh, after you remove to a serving plate and sprinkle the green bits of the spring onion of course. 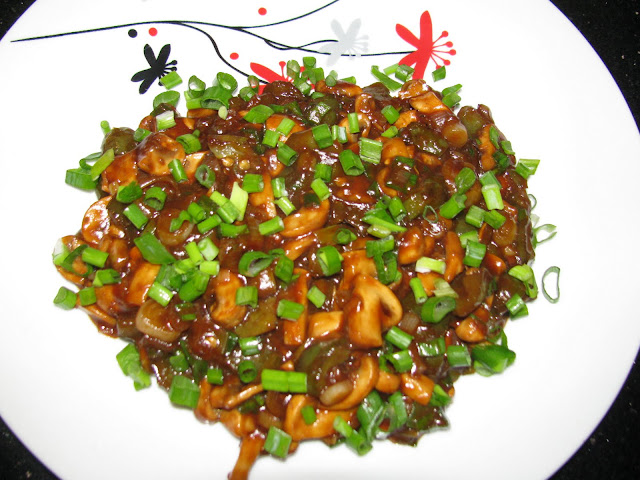 For the dry version, just skip step 4. That means you discard the left over marinade mixture and skip the cornstarch and tomato ketchup.